Cloning, moving, backing up or copying WordPress sites is critical, and we’ve used several different methods over the years.  Getting the sites, databases, and files copied and safely stored elsewhere has been possible, but it’s always been a somewhat complicated process, especially the “restore” process.

Sure there were some things that could be scheduled, like automatic zipping and e-mailing of the database, but the process of backing up EVERYTHING in the WordPress site, or manually moving it from one place to another was no small task. 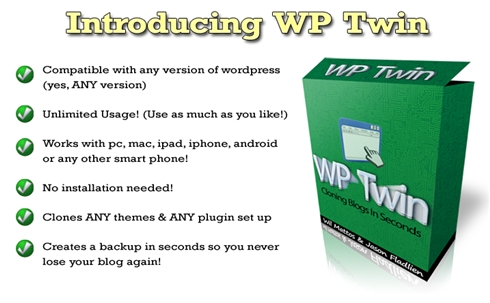 The uploads folder, the theme files, and the users and content from the database were not simply plug-and-play from one account to another, and we would typically spend 15 to 20 minutes “tweaking things” after restoring or moving a site, and in some cases, even longer.

Those days seem to be gone forever, as we’ve become happy users and affiliates of a new product called WP Twin. We’ve found that it works on ALMOST every web host we’ve tried (nothing’s perfect) and between four of us we’ve used it over 50 times now with minimal effort.

The time has averaged under two minutes to run a backup or reinstallation of the average WP site, unless the site is filled with a lot of images making the upload go a bit slower.

The way it works is that you install it, you go to an admin screen, you run the process and download one compact file, then you upload it to the new location, domain, hosting account, etc. That’s it.  All your users, all your data, all your theme files, and even your plugin and settings are instantly copied.

The restoration process works the same way, with one click of a button, and you’re even prompted to delete that backup so that nobody can stumble across it.

I could go on and on about the benefits, but if you look at their site, you’ll see that they do a good job of explaining it, and they even have a couple of videos that show the entire process.

We were  paying customers before we became an affiliate of their,  and we do recommend it highly…  Try it for yourself!