I was an Onlywire fan and paid user for a long time, but have decided to stop using it now, and I’m looking for something else to allow me to automatically submit any URL to the services of my choice .

Why am I dumping Onlywire?  Well because for me, their “new and improved” version is just less efficient and because it suddenly costs 5x more!

Although it was (and still can be) free to use under certain conditions,  I was paying their low annual fee because it was reasonable, and because I wanted to support them.

Although I use it infrequently, and I’m just a casual user, I found it to be really convenient, because it was so easy to choose each time,  just exactly what I wanted to submit and where I wanted to submit it, all from one screen with just one toolbar button.

Now however, I recently went to bookmark something  (simply to add a private bookmark on delicious), but when I hit Onlywire, instead of seeing all of my service icons, I saw the post information boxes instead, which wasn’t what I was looking for.

If you never saw it, here’s what it USED to look like…

(I have that screenshot from an old SEMpdx social media presentation I gave, where I recommended them for efficiency )

Here’s what it looks like now, with no icons for choices. You simply “submit to everywhere” which basically means you’re spamming… 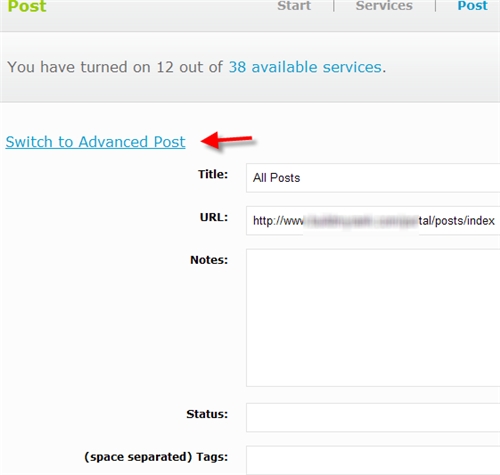 Then I noticed I could hit the link for “Advanced Post”,  but whe nI got there, instead of the nice tidy row of icons, there’s a ton of scrolling involved to make your selections, like this…

I suppose if you’re a spammer, then this might be considered an improvement, because you can actually edit the individual notes for each service, but seriously?  This is supposed to be efficient?

Delicious is Gone?
The final straw came when  I noticed that Delicious seems to be removed entirely, which is why I was using it in the first place.

I checked and double checked, and Delicious is no longer on their list, although they DO still have it prominently featured from their home page…

Finally, I took a look at their price structure, and see that now it’s $10 a minth minimum to use the paid version, and increase of about 500%.

To be clear, if it still saved me as much time, I’d have no problem with the $10 a month, but it’s *not* efficient to first force users to make n extra click, and then to have to scroll to make choices!  Jeez, AT LEAST remember my choice, that I want “Advanced Post” view to be my default!

Well, I guess I’m on the hunt for a new solution, and although I tried a bunch of them before settling on Onlywire, it’s been a while.

What I’m looking for is a simple browser button, so that I can be on any webpage, hit a toolbar button, and make my choices and submissions from there.  Basically, I want exactly what Onlywire used to have…

Anyone got any recommendations?

Onlywire has “fixed” this, and I am using them again –

Much better – thank you!

Okay, the “fix” didn’t work consistently, and Delicious was routinely failing to post. I didn’t even KNOW that until I went looking for something that wasn’t in my account, then logged into Onlywire and saw all the FAILED messages!

Then they in December, they raised the price 500%, and reportedly (see comments below) without warning people that it was going to happen.

So… I’ve cancelled my Onlywire service entirely, and am back to looking for a replacement…